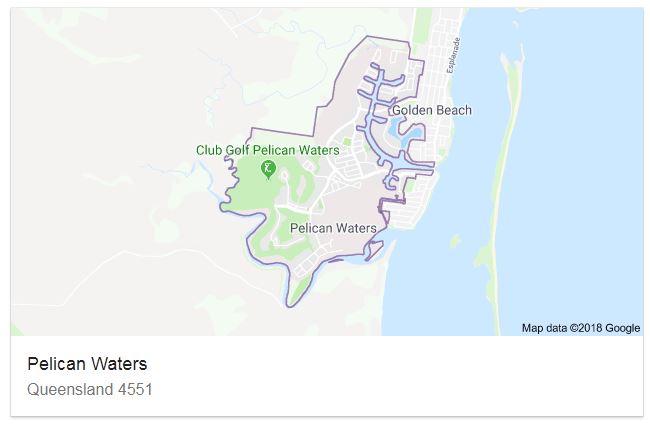 Pelican Waters, a canal-estate suburb five km south-west of Caloundra, is formed on the Bells Creek estuary and wetland. It is separated from the coast by Golden Beach, and in that way resembles the canal estates formed on the Gold Coast in the wetlands behind the coastal resort suburbs. Main Pelican Waters was the first canal estate near Caloundra since Kawana Waters (1960s), and development began in 1990. Its fundamental point of difference from Kawana Waters was a golf course, designed by Greg Norman and opened in 2001. Land sales boomed upon the announcement of the golf course, prices rising by 85% during 1998-2003, considerably more than in Caloundra. A Ramada (renamed Crowne Plaza) international resort hotel opened in 2005, and the independent Caloundra City School also opened in 2005. Forty or more percent of Pelican Water’s area is stated to be open space, the canals contributing much of that. Pelican Waters’ shopping centre (2001, warehouse, supermarket, 22 shops) is near the boundary with Golden Beach.

Can’t see any posts?  The Team at David Millar Real Estate are looking for quality properties for our interested Buyers.  Contact us for a complimentary Market Appraisal today and get your property listed.